The Raster API has two purposes: retrieving data from the Descartes Labs Catalog, and providing a consistent way of splitting that data into smaller tiles.

For information about API Quotas and limits see our Quotas & Limits page.

The ndarray, stack, and raster methods retrieve raster data, returning them either in an NumPy array or, for raster, an image file. These methods accept a list of Image id`s, which can be found by using the :mod:`Catalog ~descarteslabs.catalog client search available imagery. These methods enable you to rescale, resample, reproject, clip, resize, select bands of interest, and convert data type of the imagery in a single call.

These three methods differ in how they return raster data, but all follow the same pattern. Here’s an example of using ndarray to retrieve a visible-light image from the Sentinel-2 constellation as a NumPy array, taken over the booming town of McCarthy, Alaska in the lower-right (population 28). 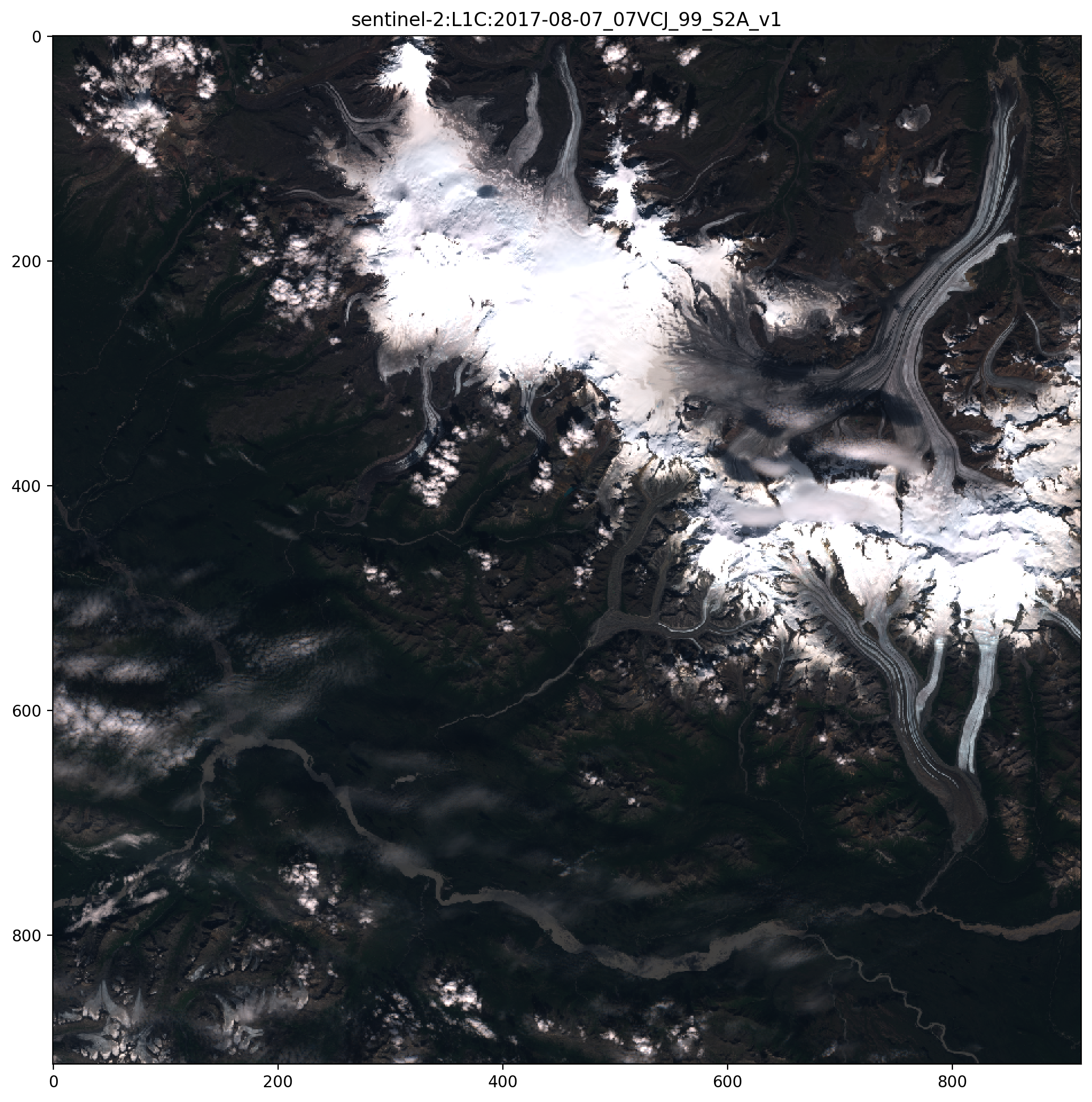 The three methods generally take the same parameters, but differ in how they return data:

ndarray returns images as a NumPy array with 3 dimensions (height, width, and bands), for analysis and manipulation with Python scientific computing tools. These are masked arrays by default which return the data along with a mask that represents pixels with no data.

You can see an example of using ndarray above and below.

By default masked=True but setting masked=False will return an unmasked NumPy array.

raster will save an image file to disk.

stack returns multiple images as a 4-D NumPy array. This is particularly useful for creating time-stacks. 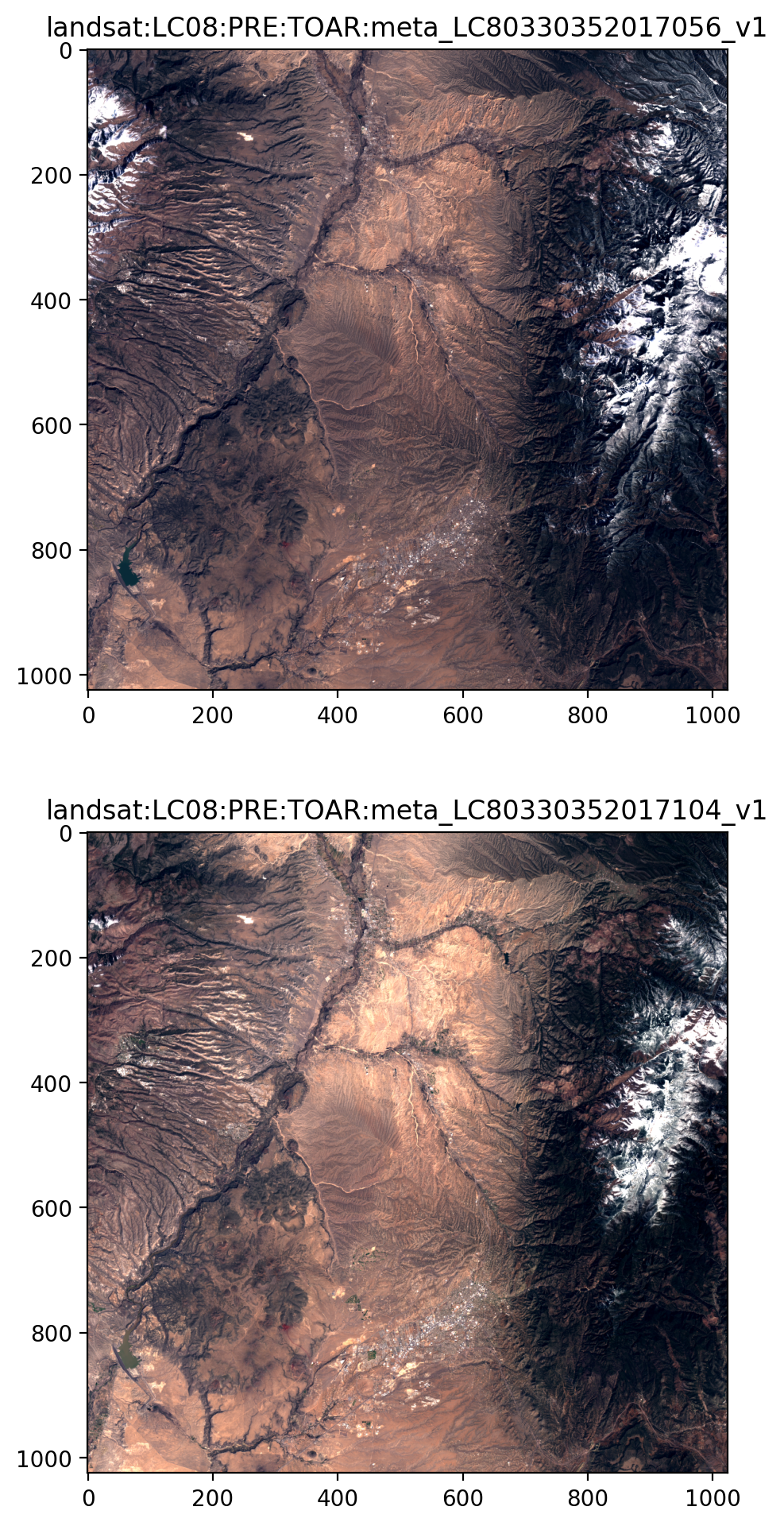 You can also pass in multiple IDs to these methods, which will mosaic those images together. This is useful when your area of interest spans multiple images.

The mosaic ordering follows the ordering of the list of inputs, bottom to top. Thus, if there is any area of overlap between images, the mosaic image will contain the data from the last image.

As an example, here are two Landsat 8 scenes taken near Rome in early 2018:

You can mosaic the two into a single image. Note that where the images overlap, the pixels from the last image in the list simply “cover up” the others. There is no compositing (as you might do with a median, mean, etc.) of the two images. 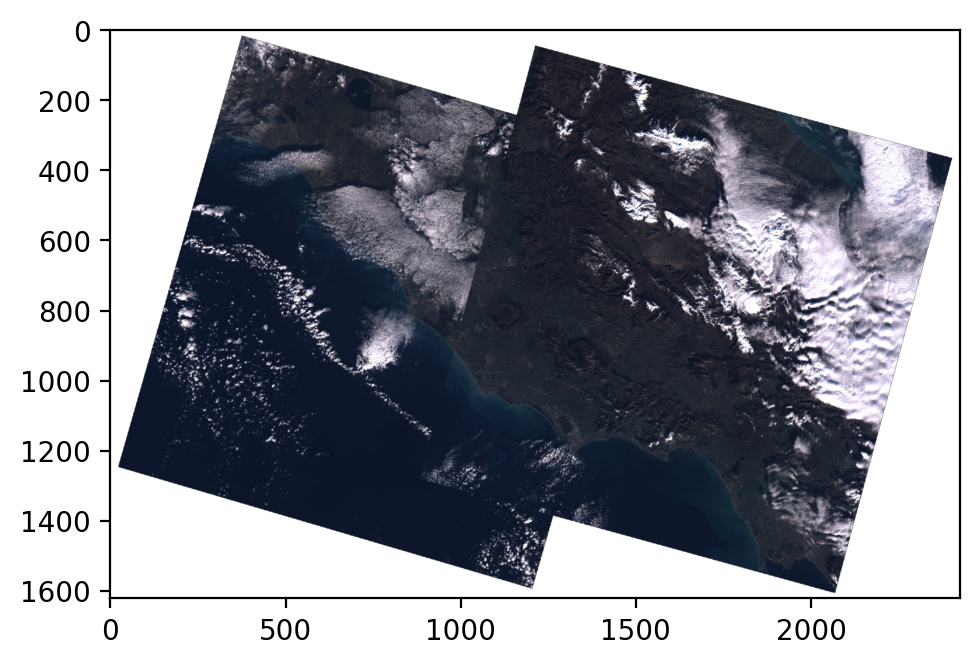 Notice how the order changes which image is “on top”: 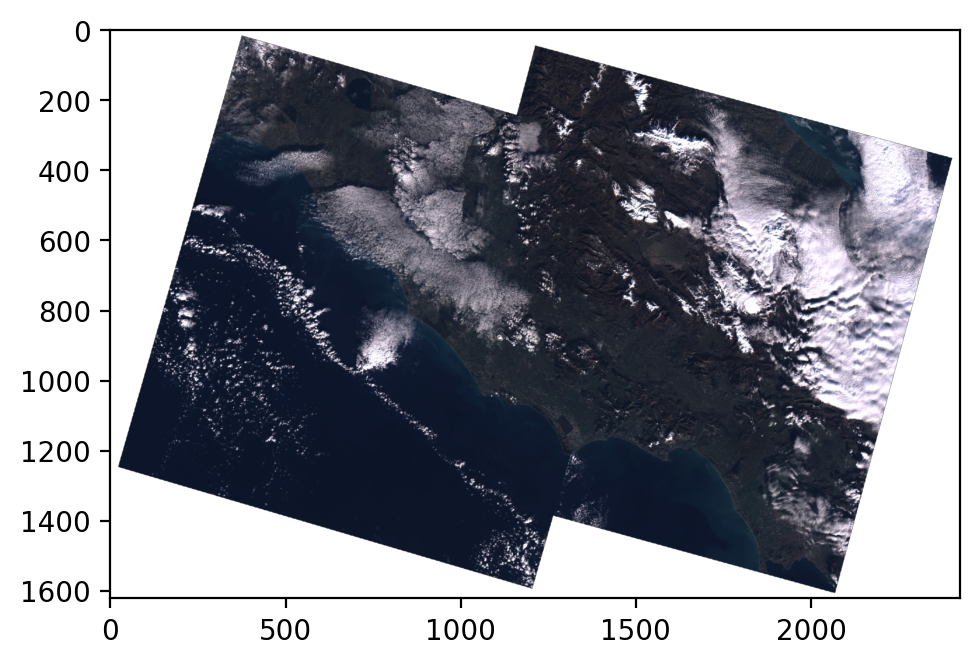 In most cases, but always when mosiacing, you should include the alpha band as the last band. The alpha band indicates which pixels are valid (1) or invalid (0).

Pixels ouside the valid data area (where alpha would be 0) may not be exactly 0, due to compression artifacts. Without including the alpha band, invalid areas of one scene may mask out valid areas of another. 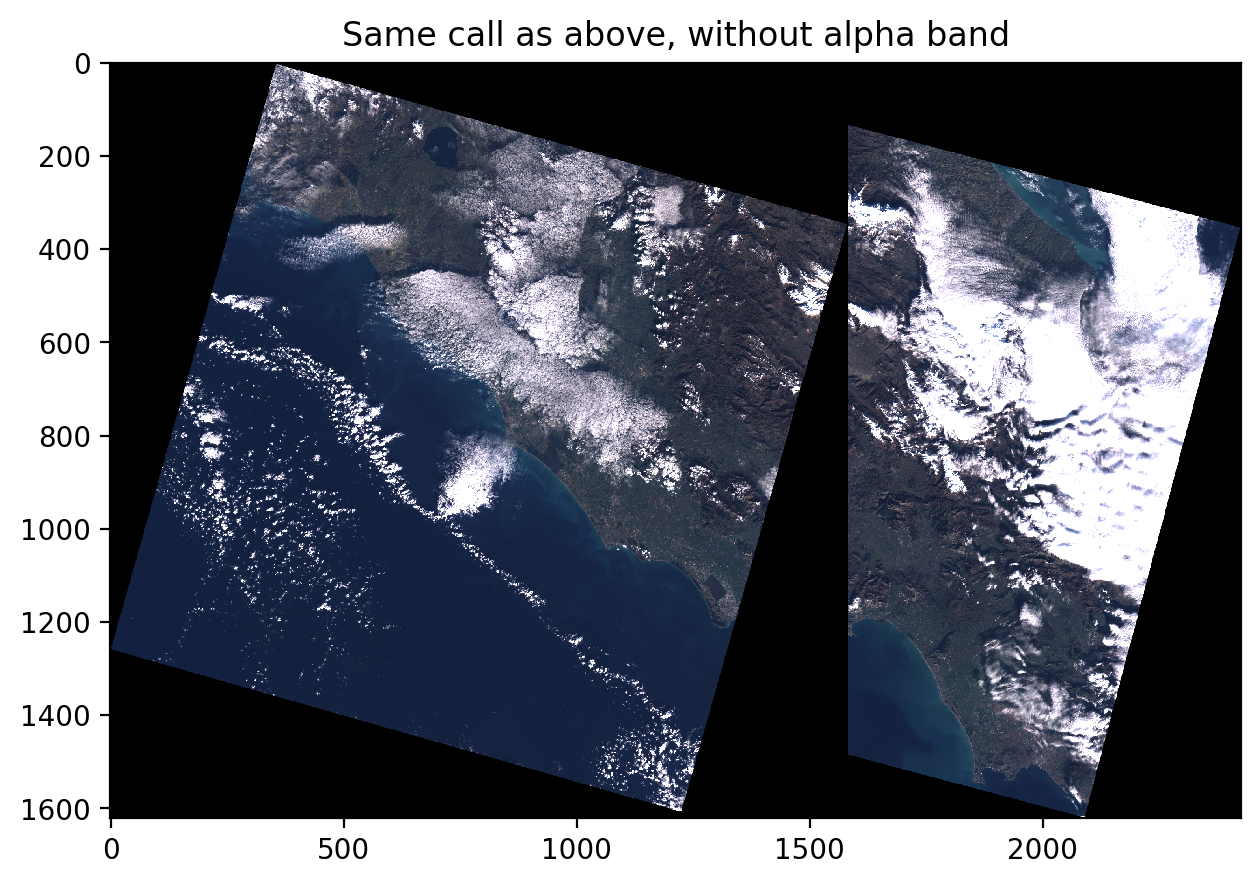 Raster methods can take many parameters to handle many different use-cases, but it’s not necessary to use (or know) all of them at first.

Use the bands parameter to choose which bands of the images you want, and in which order. Though photographs typically have exactly three bands—red, green, and blue—remotely-sensed data often has many more bands than that outside the visible spectrum. You can select as many or few bands as you want, in any order. (However, matplotlib can only display images with one or three bands.) Careful: not specifying bands will return a raster of every band in the product, which can be quite large.

Here are two rasters of the same scene of a wildfire in Oklahoma, one in the visible-light spectrum, one falsely colored with the short-wave infrared, near-infrared 2, and near-infrared 1 bands: 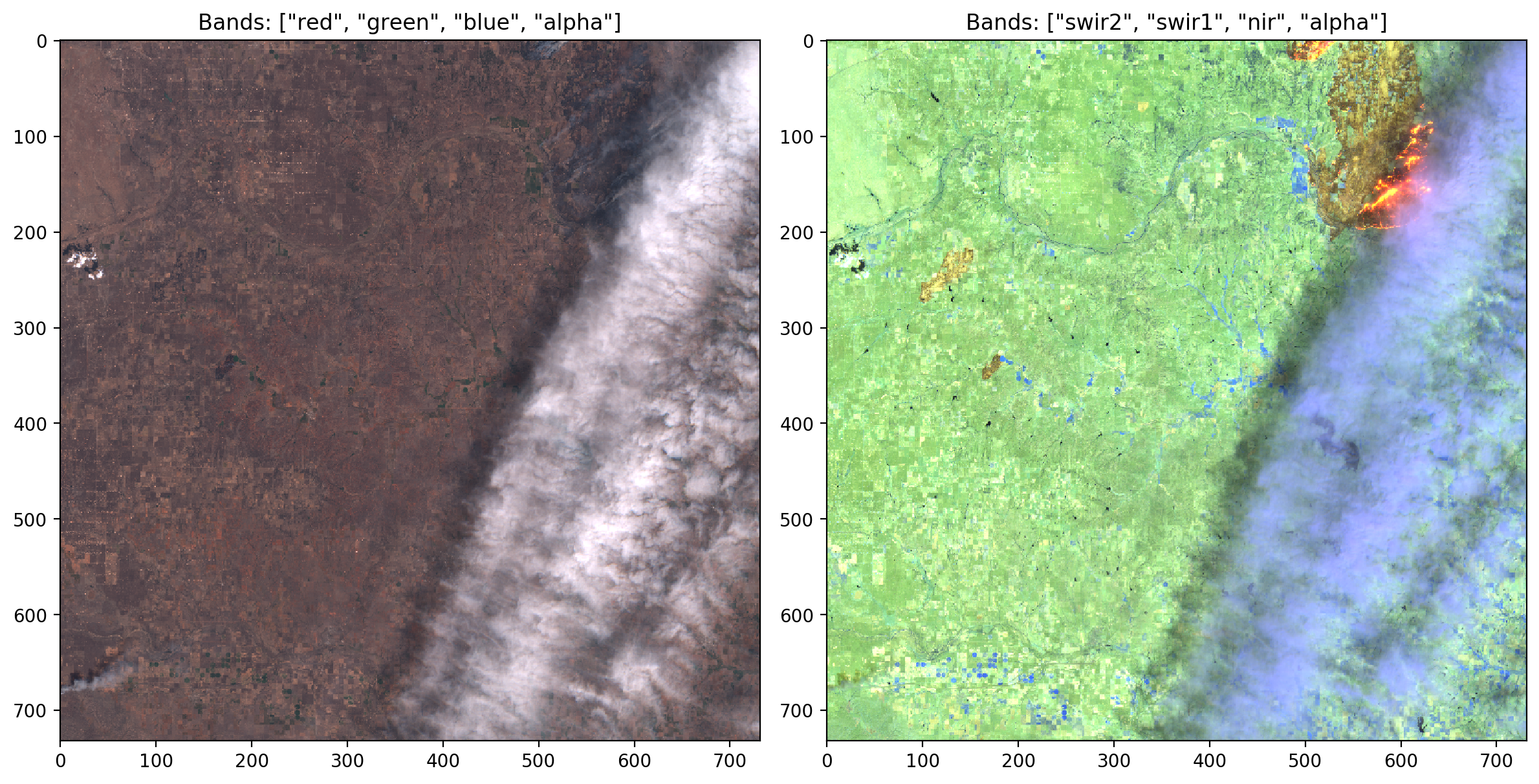 You only should specify scales if you specify a data_type smaller than the product’s native data type.

Notice how in the second image, the snowy peaks look blown out, but you can see more detail in the darker valleys. Every pixel above 4000 is rescaled to 255, so detail is lost in areas with high reflectance, and more values between 0-255 are used to express dark areas, giving them more dynamic range.

Scaling is only necessary when requesting data in a smaller data type than its native format—like above, where we requested UInt16 data as Byte. The 65,535 possible values in a UInt16 must be represented with just 255 values in a Byte. Though you could simply map [0..65,535] to [0..255], when you know something about the data, you can be more clever to reduce loss of precision.

The values in raster data have physical meaning—but for efficiency, are often stored on-disk as different numbers.

Most satellite imagery, for example, measures reflectance: the fraction of the sun’s light reflected by the Earth. (Technically, it measures radiance, which is converted to reflectance, then also possibly corrected for atmospheric absorption.)

It would seem logical to represent these fractions as floating-point numbers between 0 and 1. However, they can also be represented as integers between 0 and 10,000 without loss of precision (due to the number of significant figures to which the instrument is actually accurate).

So storing the data as 16-bit unsigned integers is as precise as 64-bit floats, but uses four times less space (and is faster to operate on for the CPU).

We call the data range the range that values can have in their on-disk format (for example, 0-10000), and the physical range the numbers with physical meaning that the data range represents (in this case, reflectance from 0 to 1).

Again: scales are unnecessary if you just request the data in its native data type. The parameter exists only to allow for the optimization of downsampling to a smaller data type (from UInt16 to Byte), while retaining control over how that downsampling occurs. Unless you need to optimize your memory usage in that way, it’s easier to specify neither dtype nor scales and work with data in its native format. If necessary, you can use display to visualize it (since matplotlib’s imshow can only handle uint8 arrays).

You should always specify a scaling when requesting data in a different data type than its native format.

Otherwise, you’ll get unexpected results, as the original binary values are simply cast to the new data type. 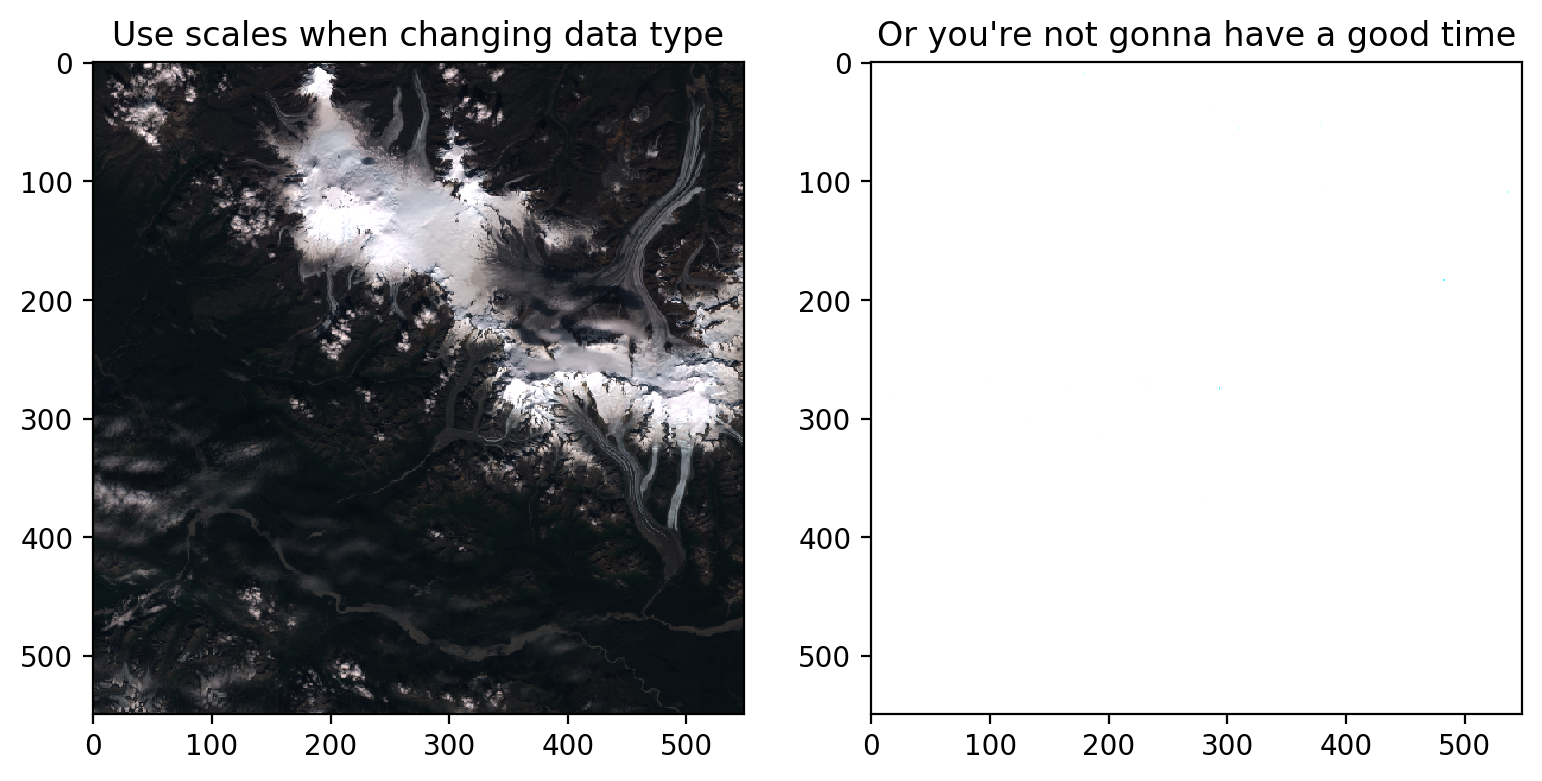 A cutline clips raster data to geometry of your choice. Cutlines can be any GeoJSON object, or a WKT string. As a GeoJSON object, coordinates are expected to be in WGS84 lat-lon. 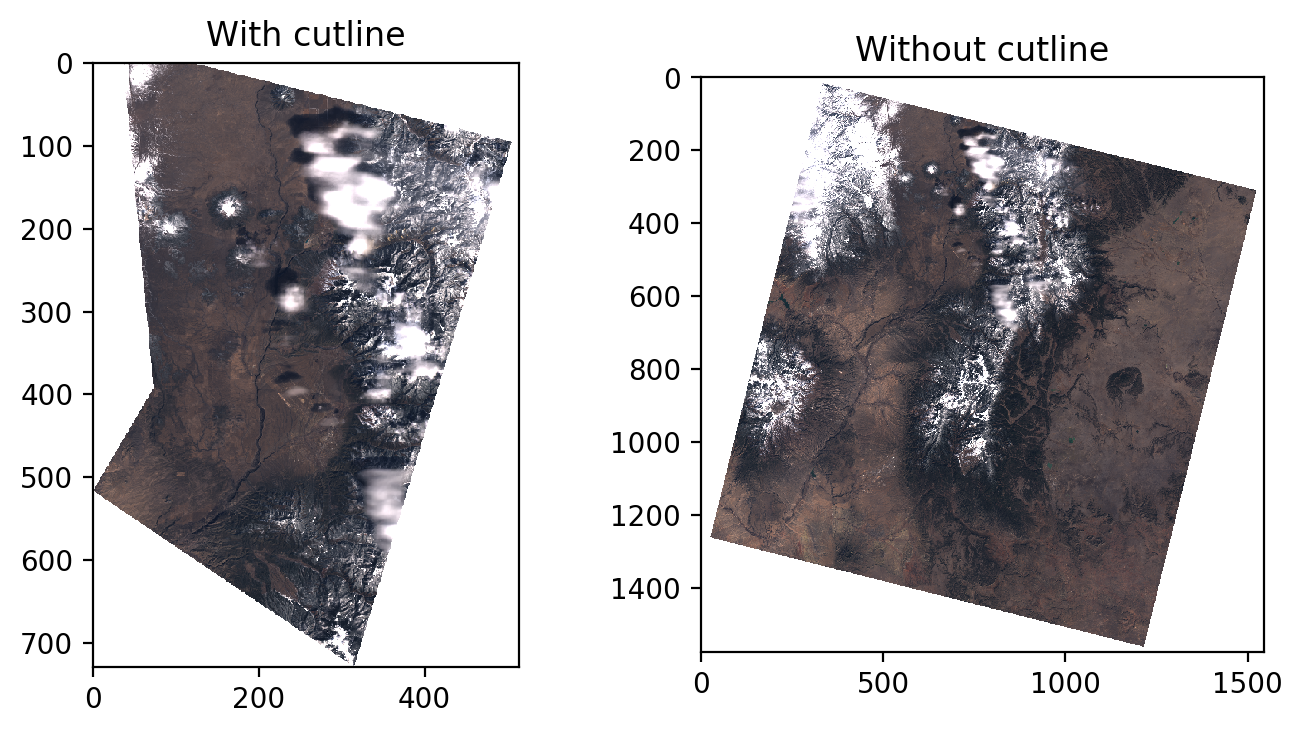 Bounds clips rasters to a rectangular spatial region defined by [min_x, min_y, max_x, max_y]. If bounds_srs is not set, those coordinates should be in the same spatial reference system as the output.

Bounds define a spatial region more explicitly than a cutline; if you find that different images with the same cutline have slightly different numbers of pixels, try setting the bounds.

The SRS (Spatial Reference System, also known as Coordinate Reference System) sets the map projection of the output raster. It can be specified as an EPSG code (like “EPSG:4326”), a PROJ.4 definition, or OGC CRS Well-Known Text.

Here’s the first image we saw over Alaska, in its (native) UTM projection, versus a WGS84 geographic coordinate system (Plate Carrée, where latitude and longitude are mapped directly to x and y), versus an Arctic Plolar Stereographic projection, if you’re into that.

The affine geotransform matrix for the raster is available in the rasterization metadata dictionary that’s also returned from raster calls if you need it for interacting with other geospatial software, or uploading data back to the Descartes Labs Catalog.

Resolution specifies the distance that the edge of each pixel represents on the ground, in units of the SRS. So in UTM coordinates, for example, it should be given in meters; in lat-lon coordinates, it should be in decimal degrees. Therefore, the smaller the number, the finer resolution.

Using as coarse of a resolution as possible for your analysis will be both faster and cheaper (less data to transfer over the network, and to operate on). In particular, loading an entire scene at full resolution is rarely necessary, and will take a while.

Dimensions specify a width and height, in pixels, within which the output raster should fit. 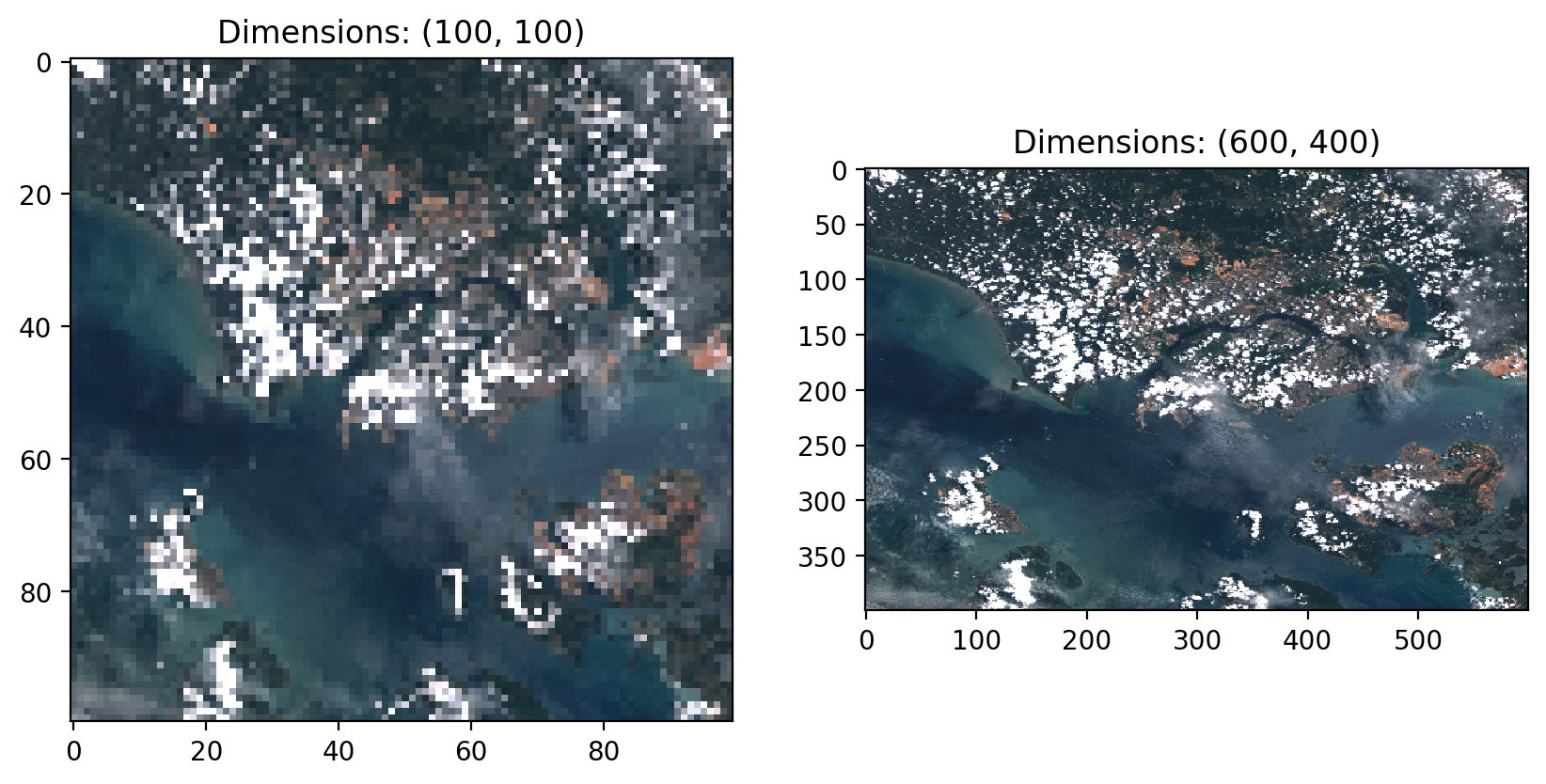 The align_pixels parameter ensures that pixels’ top-left corners in the output raster correspond to non-fractional intervals of resolution in the output SRS.

What does that mean? Consider requesting two rasters in some imaginary coordinate system with units in meters, one requested with the bounds [0, 0, 10, 10], and another with the bounds [0.5, 0.8, 10.5, 10.8]. Since both areas are 10x10 meters, both rasters would be 10x10 pixels at 1-meter resolution. However, pixel (0, 0) in the first raster would refer to the coordinates (0, 0) in our imaginary SRS, whereas pixel (0, 0) in the second would refer to (0.5, 0.8). Therefore, though the pixels would have the same array indicies, they wouldn’t be quite aligned to the same place on Earth, and comparisons between them would be invalid.

Specifying align_pixels=True in this case would internally shift bounds for you, so that the coordinates fell on whole-number intervals of 1 meter. In that case, the bounds of the output would end up being [0, 0, 10, 10].

Therefore, when you’re loading different images covering the same area, and you want to compare pixel-to-pixel between them, set align_pixels=True in most cases.

It is recommended to leave cutline_all_touched at its default value. In general it guards against systematic bias in the results. However, there are circumstances where all_touched=True is warranted. This is the case when the destination resolution is smaller than the source resolution and the bounds of a destination pixel may not contain the centroid of any source pixel, resulting in a masked pixel.

This determines the algorithm used to interpolate between pixels when scaling up, scaling down, or otherwise warping a raster to a new resolution or SRS.

Nearest-neighbor is the default (fastest but lowest-quality). Bilinear produces visually smoother images when downsampling. Be aware, though, that if using discretely-valued data (such as a raster classification layer where 1 means brick, 3 means wood, etc.), use a resampler like nearest-neighbor or median—an interpolating resampler could produce values that don’t exist in your input data (like 2). 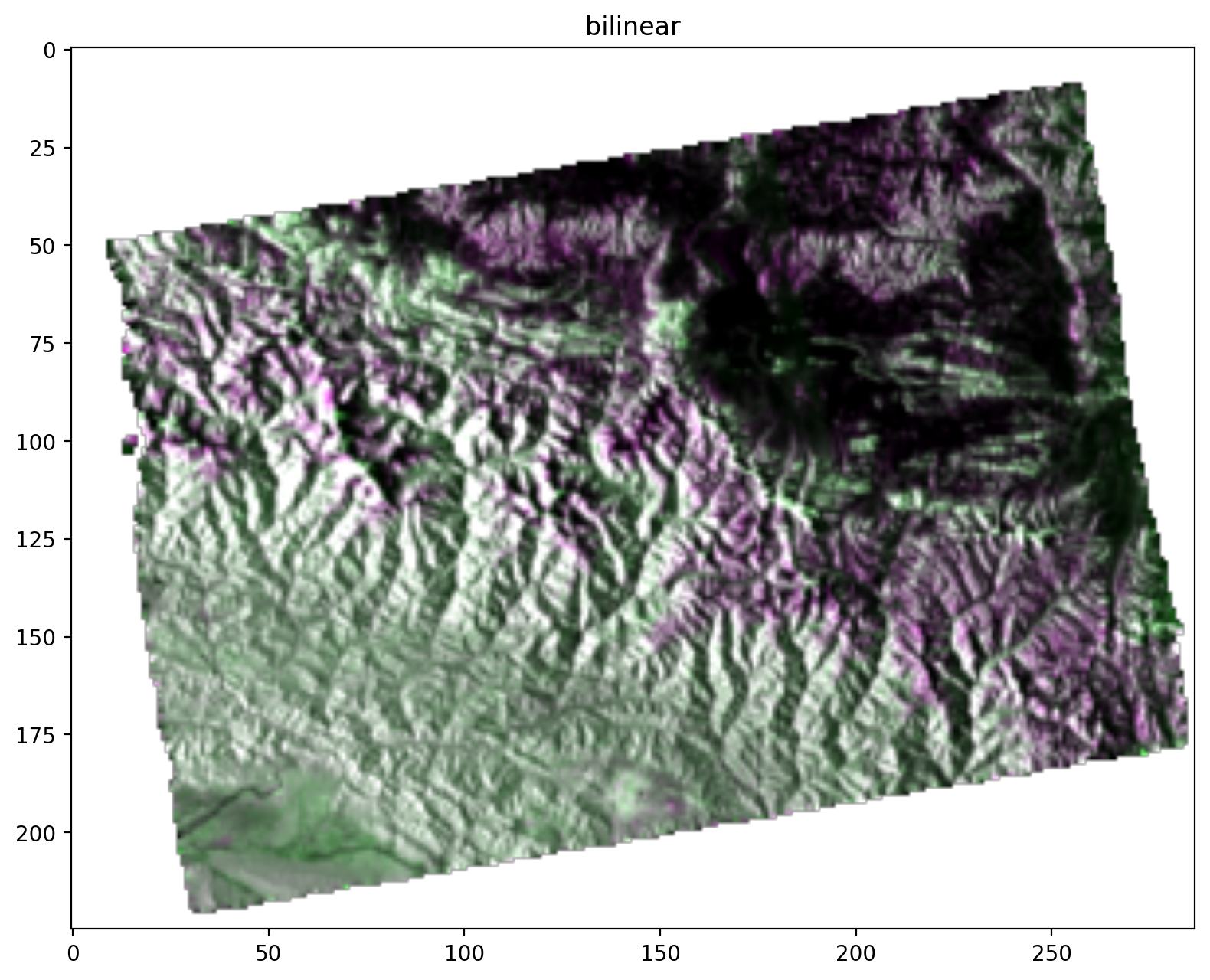 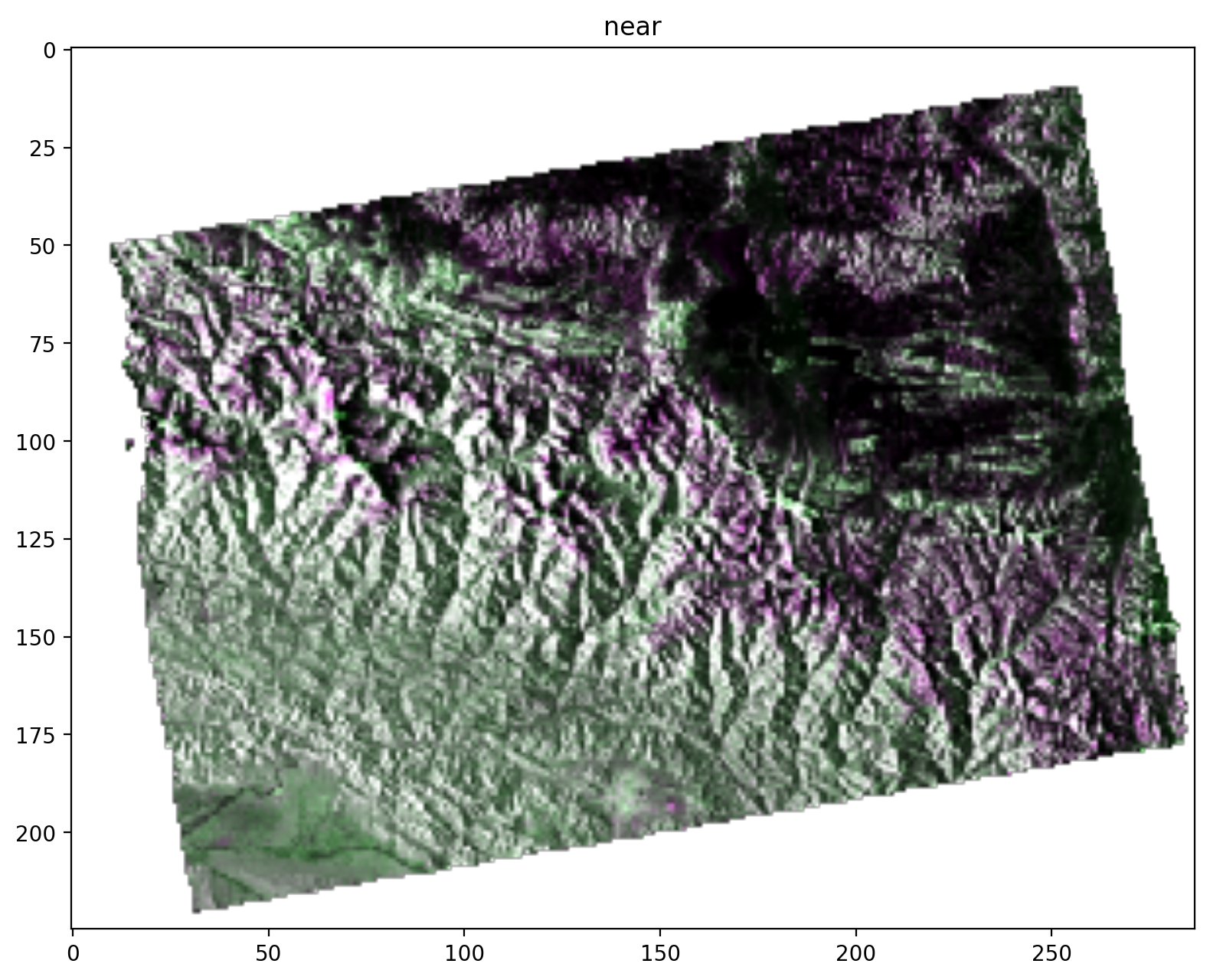 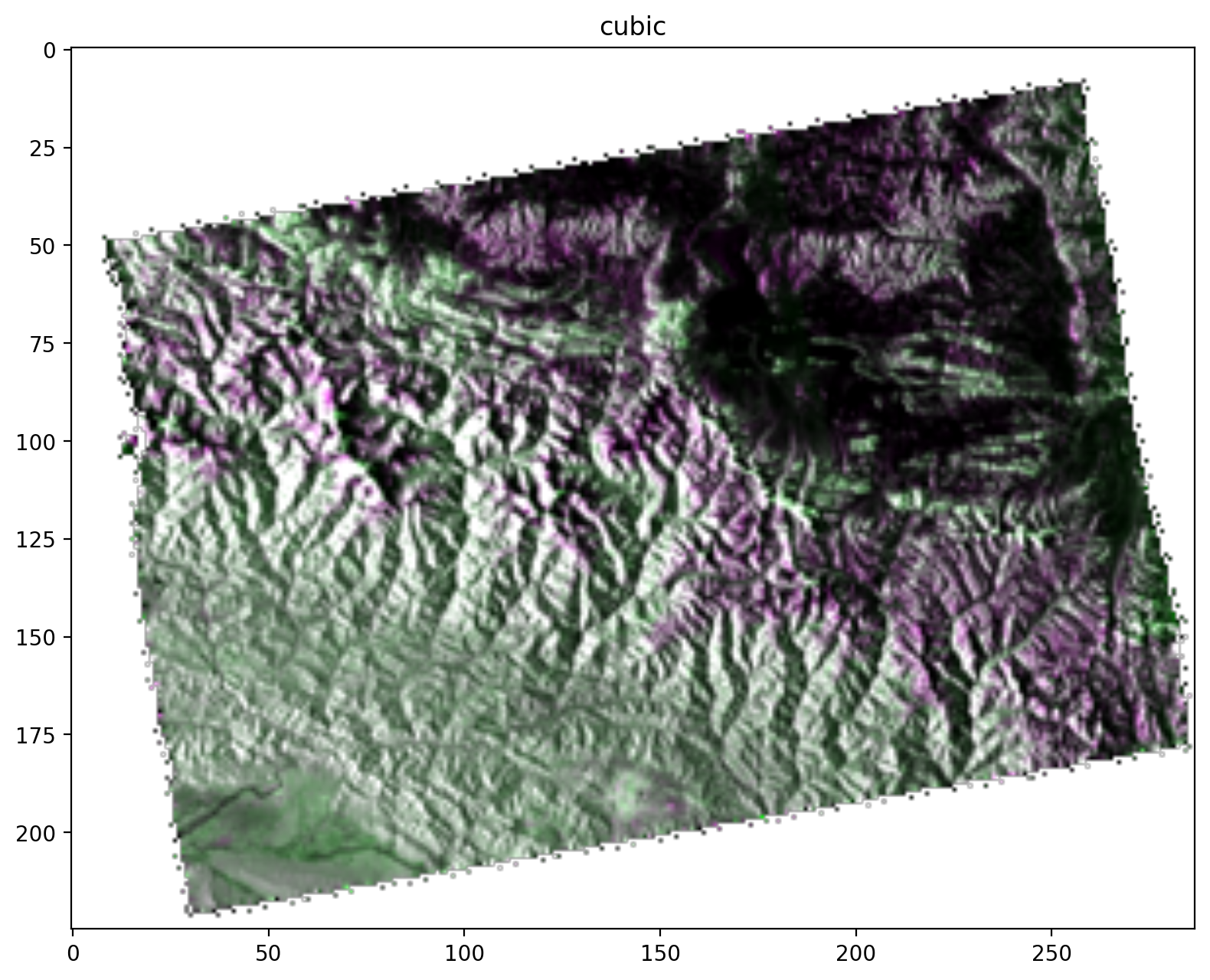